LIGA.net: 30 Products of Independent Ukraine That Took Over the World

Do you remember the 3D animation during Jamala's performance at the Eurovision song contest in 2016? It was created by the Ukrainian studio of innovative audiovisual (AV) technologies Front Pictures. But on-stage super effects are only part of the company's business. In addition, it does installations, dome systems, 3D mapping as well as projects for film and television industries. If you enter the largest planetarium in the UK or Korea, you will encounter Front Pictures technology there.

The company was founded in 2003 by former Leo Burnett advertising agency employees Yurii Kostenko, Vitalii Sliusarenko and Maksym Zaitsev… Very quickly the company moved to 3D visualization and immersive multimedia solutions. It was on their interactive media table (i.m.table) that Yevhen Filatov (The Maneken) created his music in 2008.

Since 2010, Front Pictures has been creating 3D mapping shows and installing its digital Fulldome systems. The company combines digital content and technology in its work. Its Screenberry media server is able to “stitch” parts of a video in order to seamlessly project it on a spherical surface. 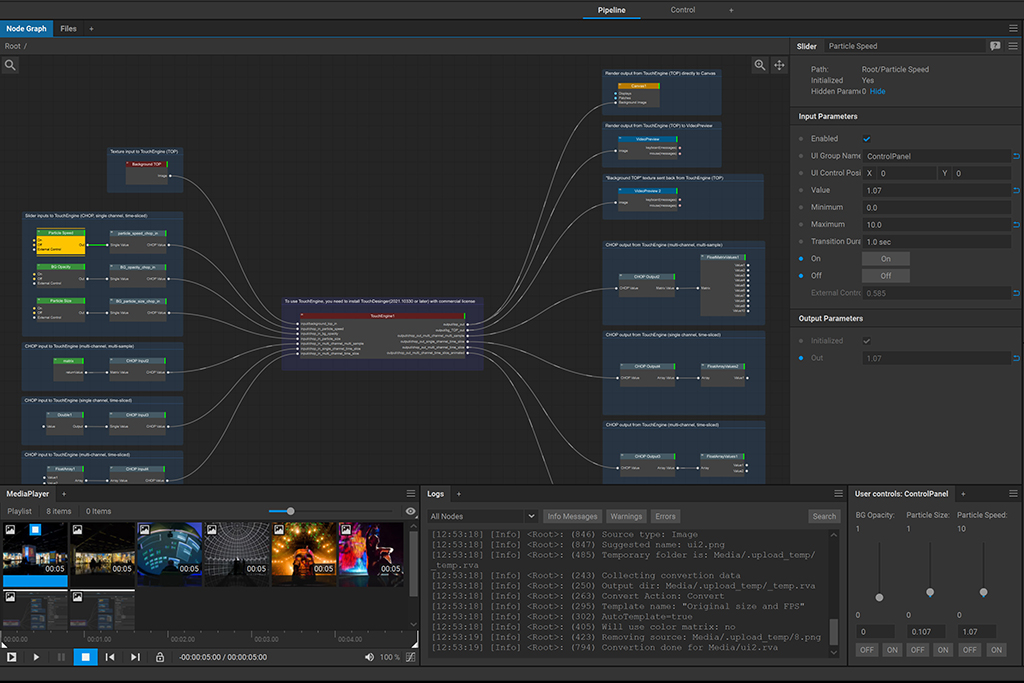 With 40 people on board, Front Pictures is a team of digital artists, creative technology experts, and software developers. Back in 2005, when we started our journey into the world of shows and events, we discovered that most of the existing media servers were cluster-based systems using a ‘one computer per one output device’ approach.

Freckled Sky’s one-of-a-kind water-projection performance "Another World" was announced by Billboard as one of the Best America's Got Talent Golden Buzzer Auditions Ever. The Golden Buzzer was introduced during season 9 of the show, with each judge only getting to press it once per season. If you're put through with the Golden Buzzer, you advance straight to the live shows. 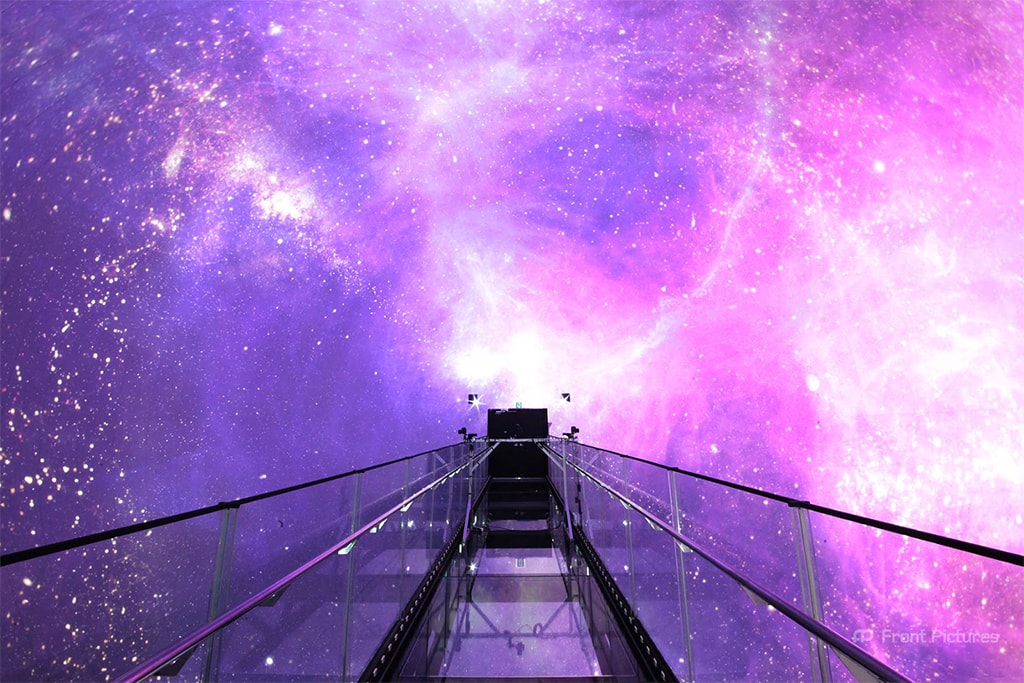 A glass bridge in the center of the spherical construction hosts up to 45 spectators and allows them to enjoy the best view of what is happening around them. High-resolution projectors create an immersive environment that allows visitors to dive into a virtual world without the need for VR headsets. This was made possible by visual solutions experts from Ukrainian company Front Pictures.

The article is in German 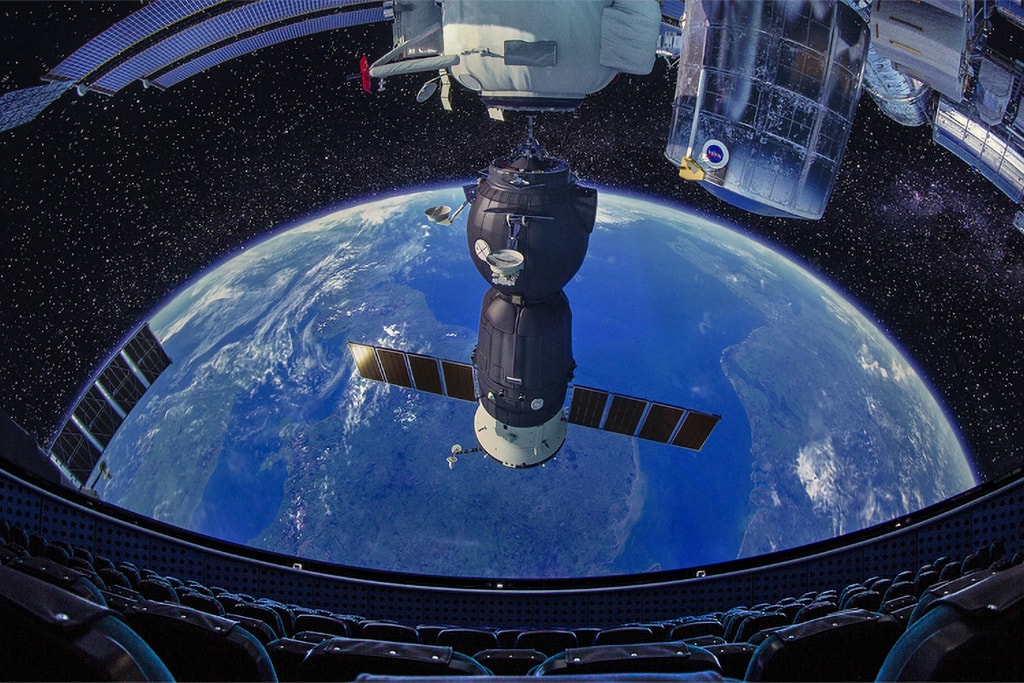 Kiev-based company, Front Pictures – a leading manufacturer of projection domes for mobile and permanent installations – worked in collaboration with the NSC technical team on the system design, audio-visual engineering, and system integration.
The article is in English 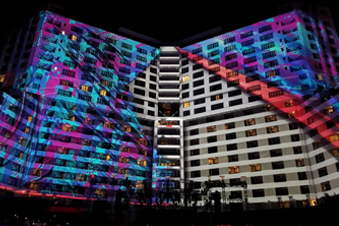 Tasked with delivering on Melody Makers’ ambitions, New Media Creative Technology Studio (Madrid, Spain) and Front Pictures (Kiev, Ukraine) provided the projection system that illuminates the hotel. Between them, the two projection mapping specialists boast more than 30 years of combined experience.
The article is in English 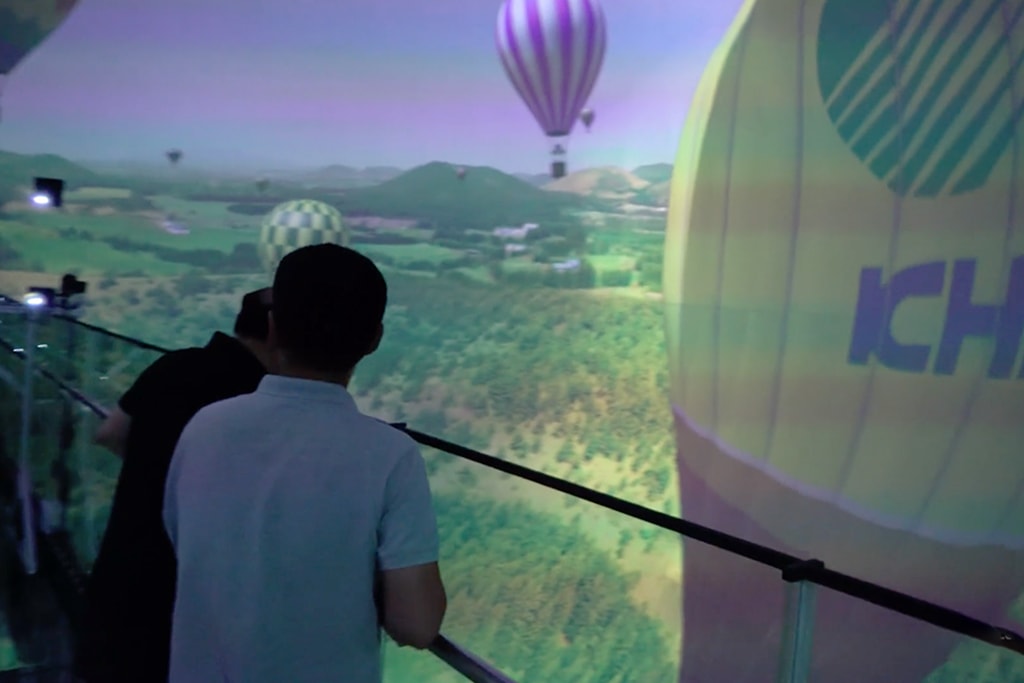 TECHINSIDER – This theater fully immerses viewers as they stand and watch

This theater takes VR to a whole new level. Space 360 is a spherical projection theater. It creates a small universe around viewers. This eliminates the need for VR headsets.
The video is in English 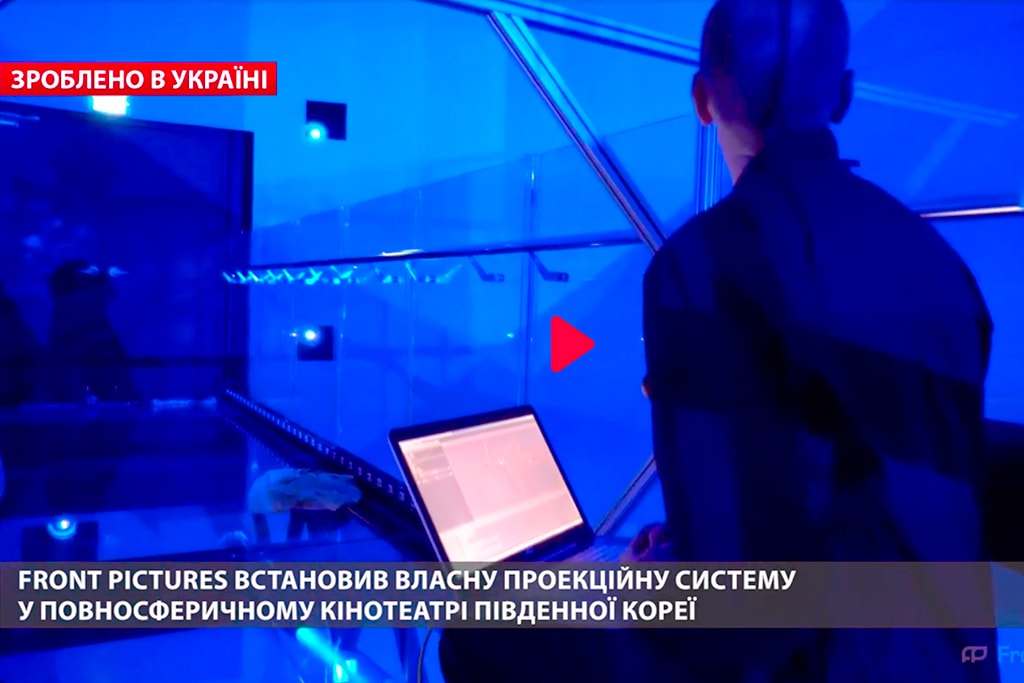 Nowadays, you won’t surprise anyone with virtual reality glasses that allow to watch 360 video. But Ukrainians have proposed something more interesting. In June 2017, they have installed a projection system at South Korea’s first full spherical projection theater. When visitors step inside the sphere which has 12 meters in diameter, they find themselves on a transparent glass observation bridge and see a video projection around, above, and below them.
The article is in Ukrainian 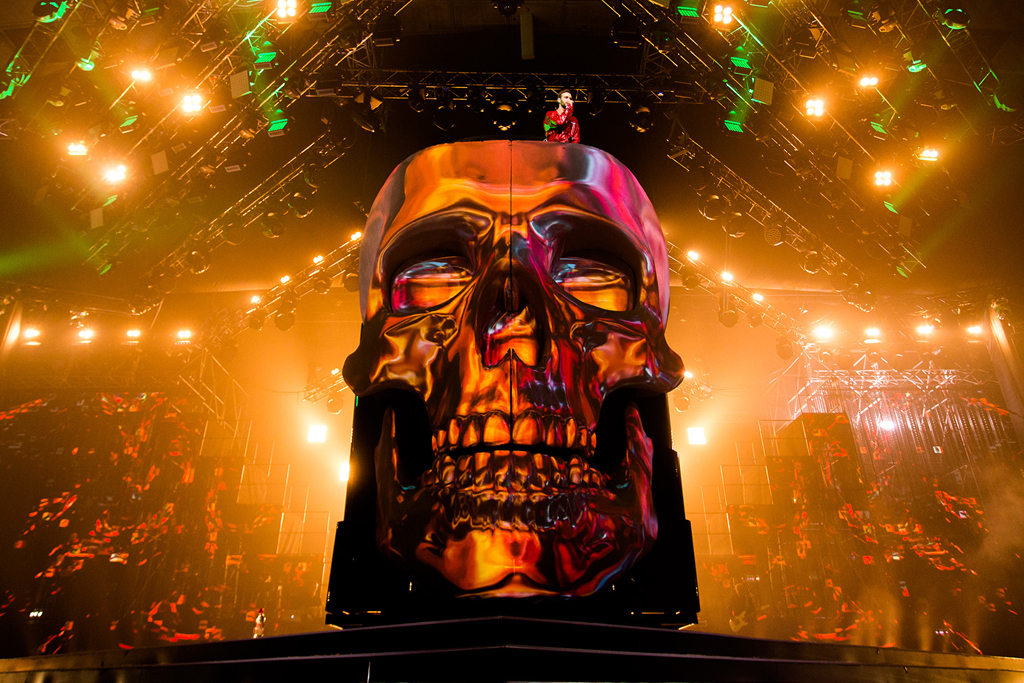 In October this year, Max Barskih delivered a grand concert with the presentation of his Tumany program at the Kyiv Palace of Sports. This concert marked a milestone not only in the musician’s career but in the entire Ukrainian show business industry as well. For the first time, an “animated” 6,5-meter skull was used onstage. 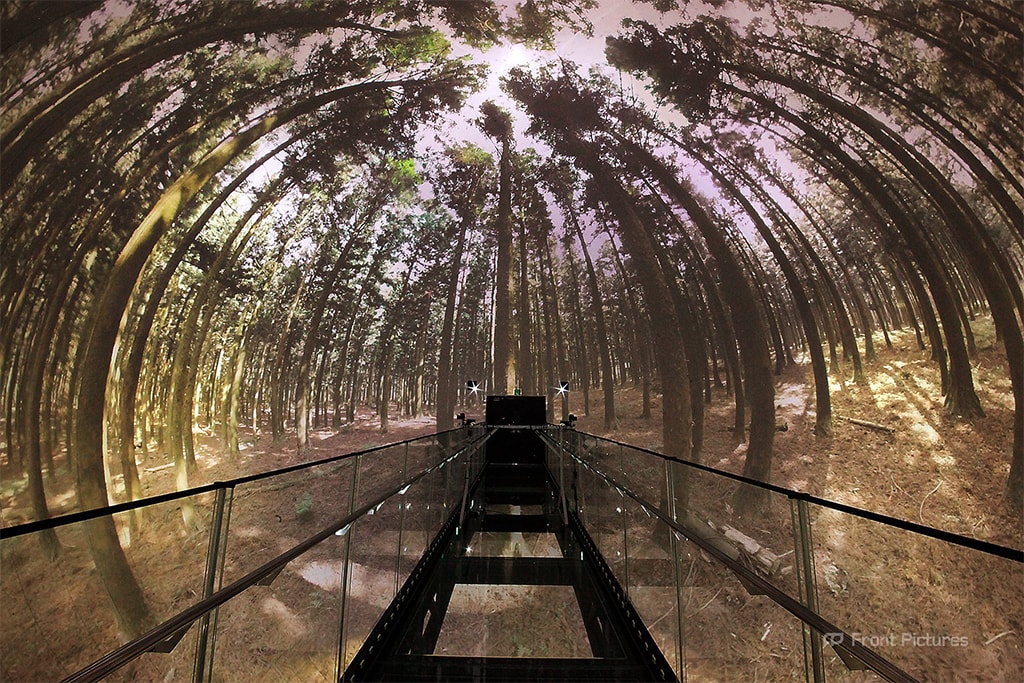 One of the latest immersive 360 spherical theatres helping transform the audience experience has been built in South Korea, with Front Pictures engineering and installing the projection system and software. Space 360 – which is 12 metres in diameter – is located next to Lucerium National Science Museum in Gwangju.
The article is in English 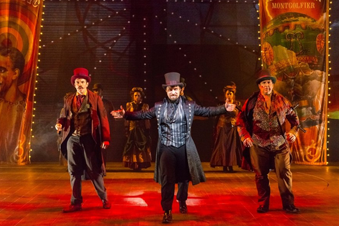 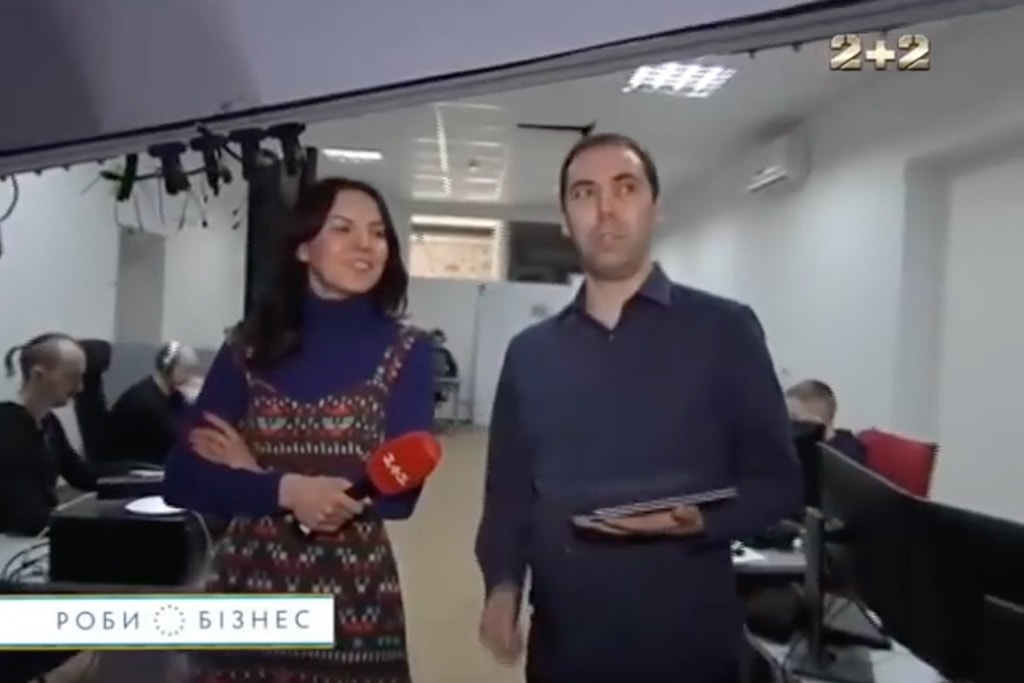 2+2 Channel – The Visual show that conquered the world 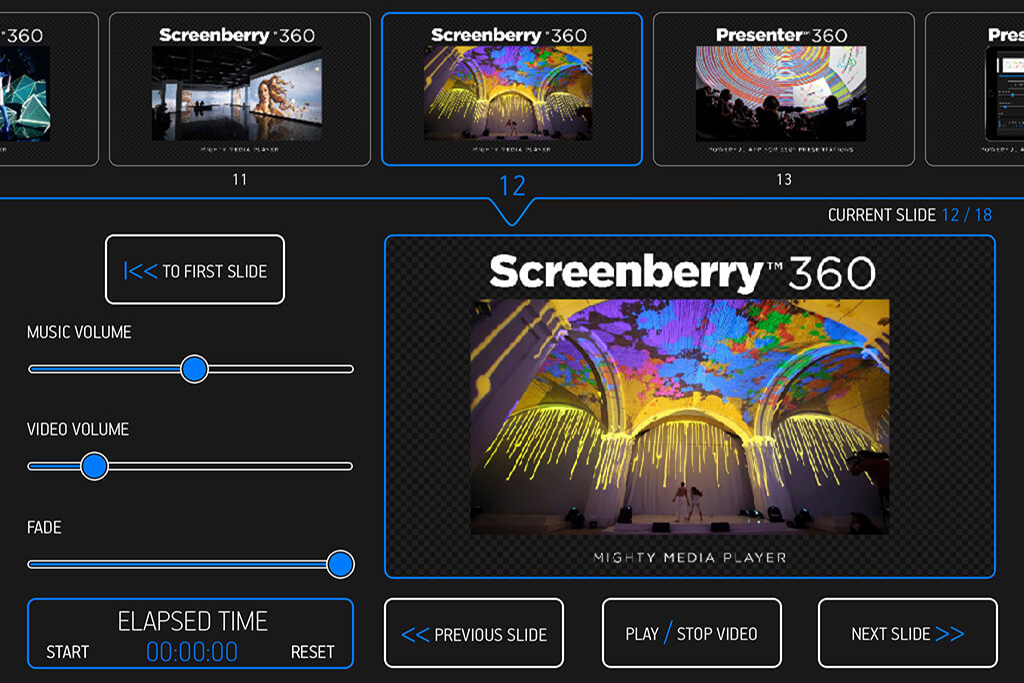 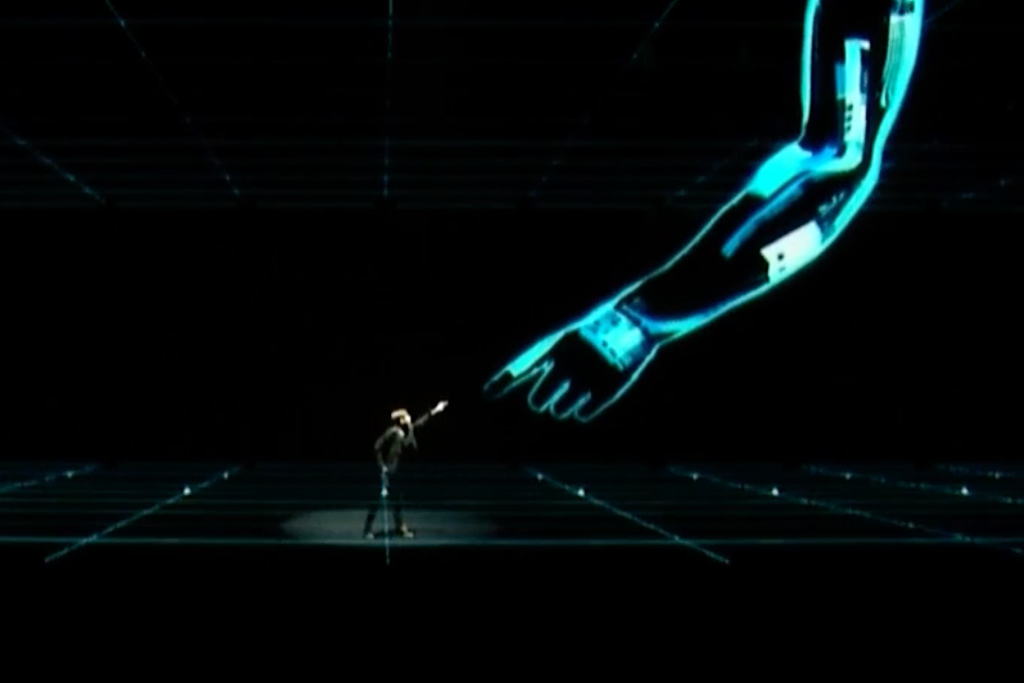 Datapath technology proved central to a highly creative, multimedia launch event for the new Mercedes-Benz Travego at the company’s Turkish dealership in Istanbul. Two Datapath x4 display controllers were deployed in the set-up by regional system integrator, Front Pictures Studio, in order to output signals to a large number of projectors from a single server. 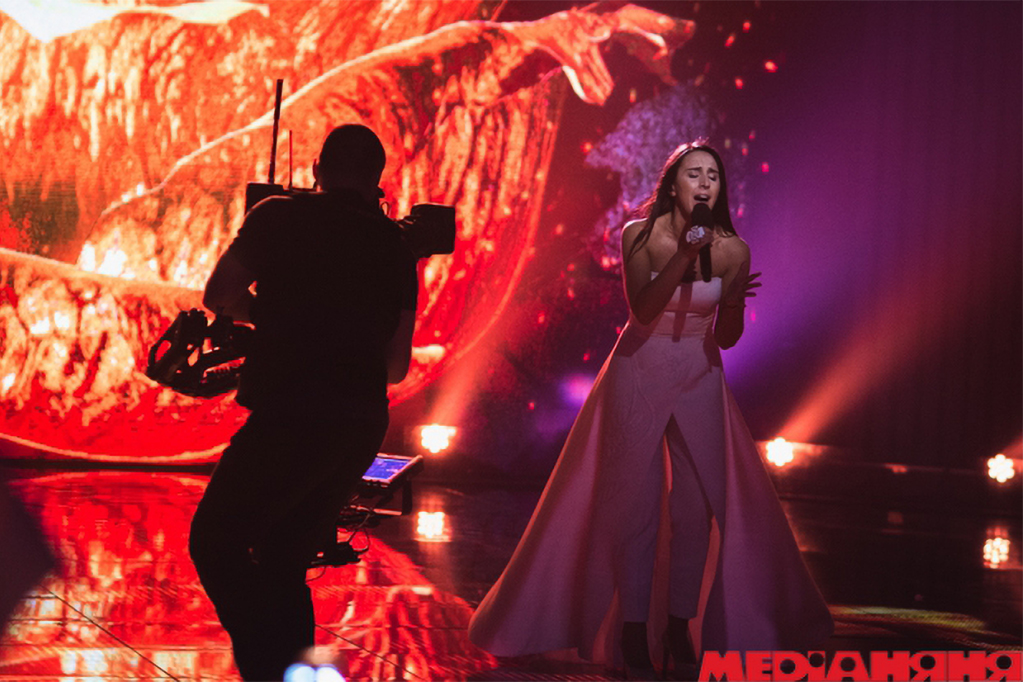 Mediananny — The Ukrainians that made revolution in technology, flms for planetariums and victory at Eurovision 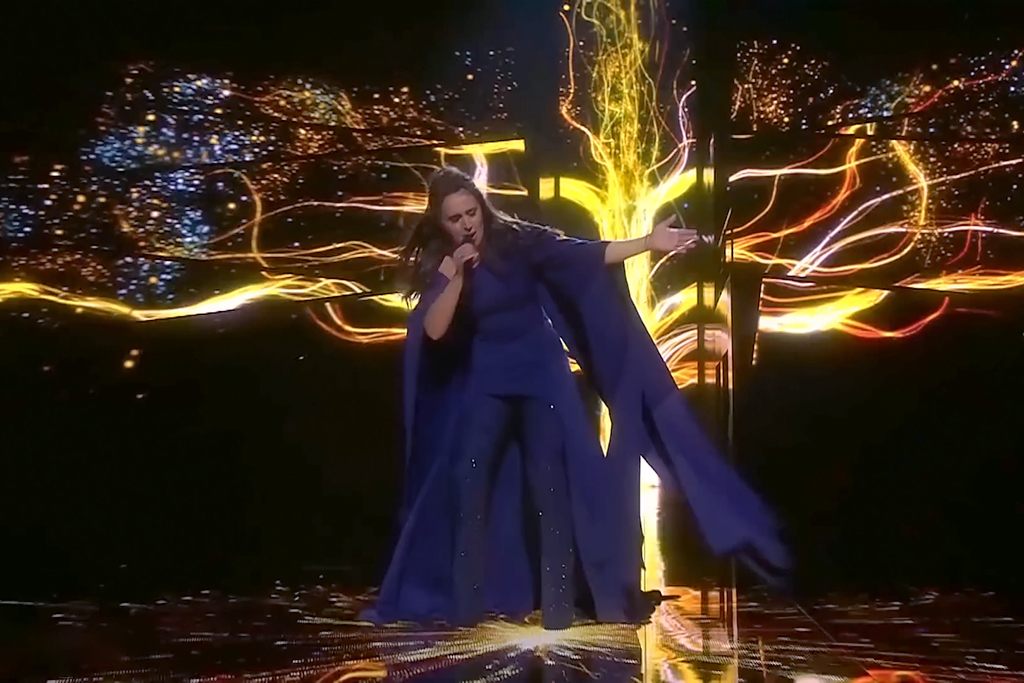 In early March, Jamala began rehearsals for her Eurovision performance together with stage director and choreographer Konstantin Tomilchenko. Jamala announced that her performance would feature 3D mapping graphics developed by Front Pictures. The performance focused on Jamala as the predominately dark stage displayed yellow, red and orange colours and patterns with a large colourful tree appearing on the LED screens during the final chorus. 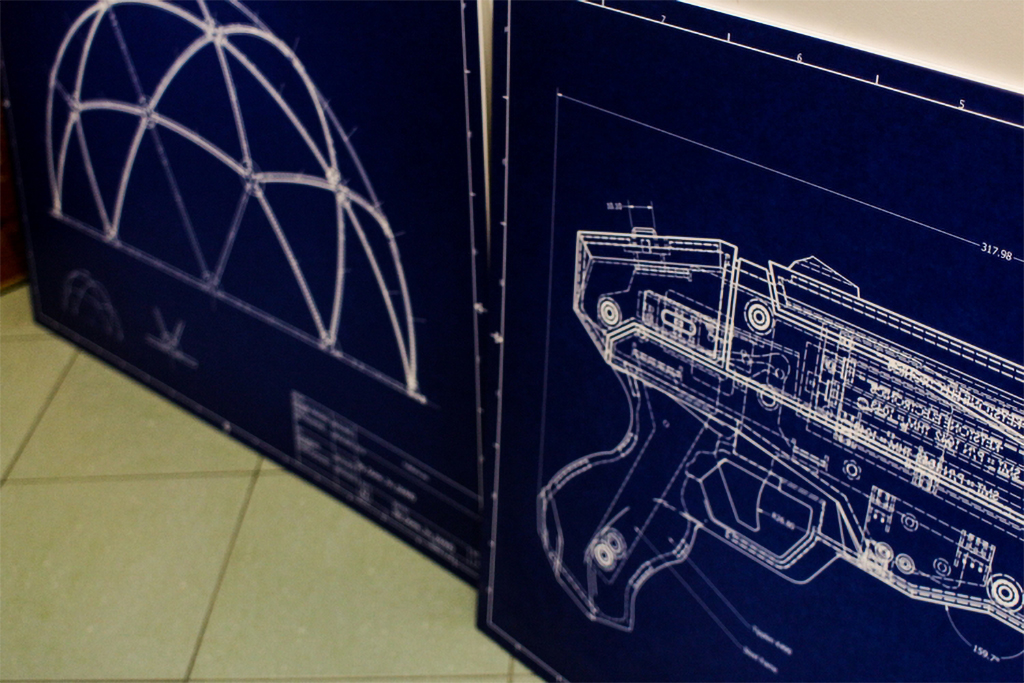 AIN.UA — Ukrainians That Make Magic. A Report from the Front Pictures Office 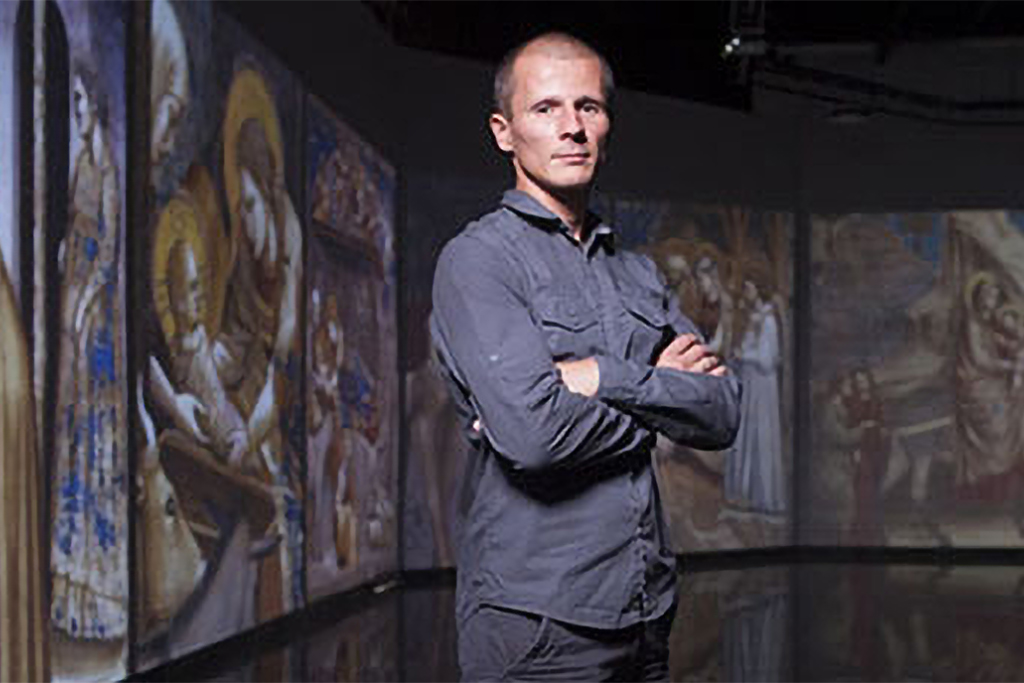 Forbes Ukraine — Advantage of the Small 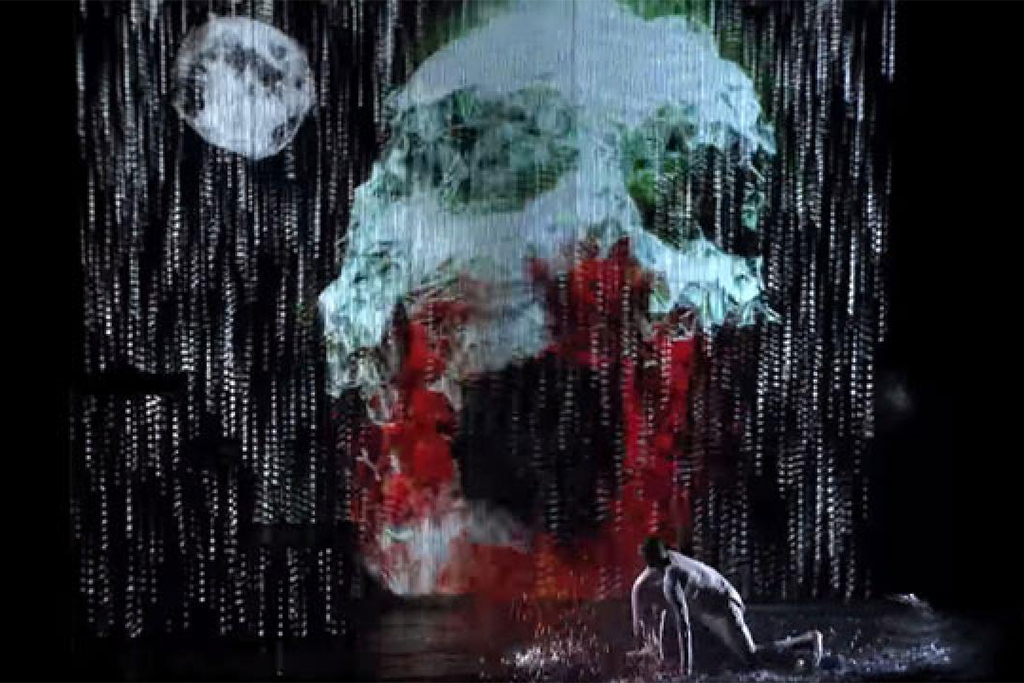 Entertainment Tonight on collaboration with “Freckled Sky” — This Dance Routine May Be the Coolest Thing We’ve Ever Seen! 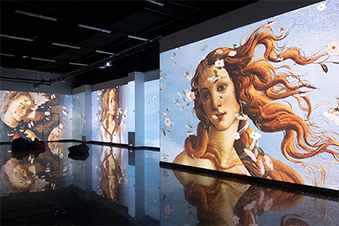 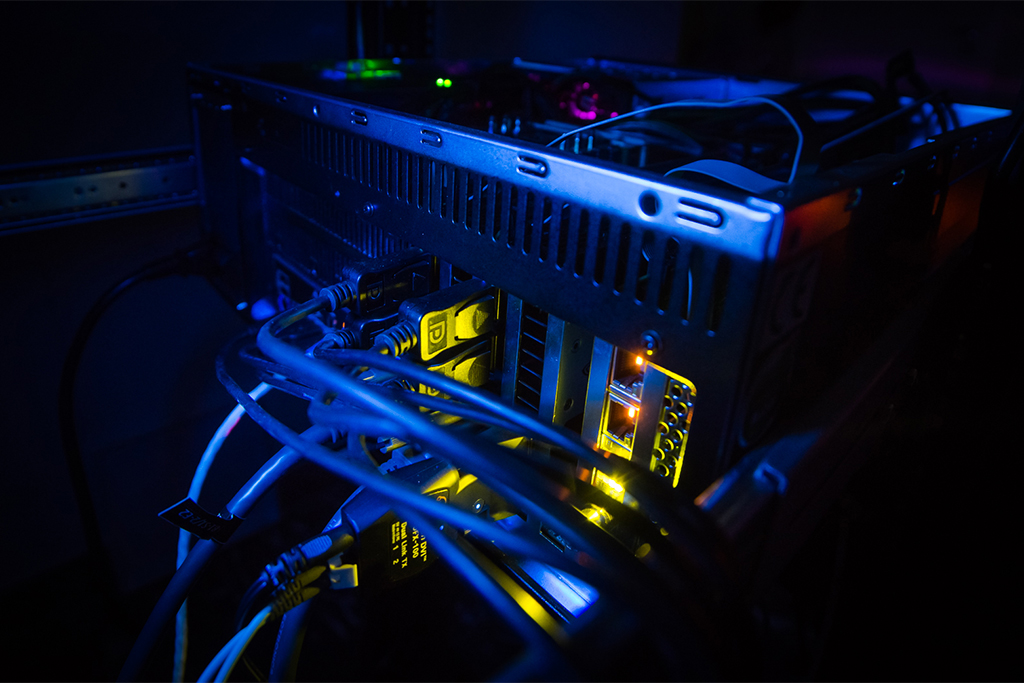 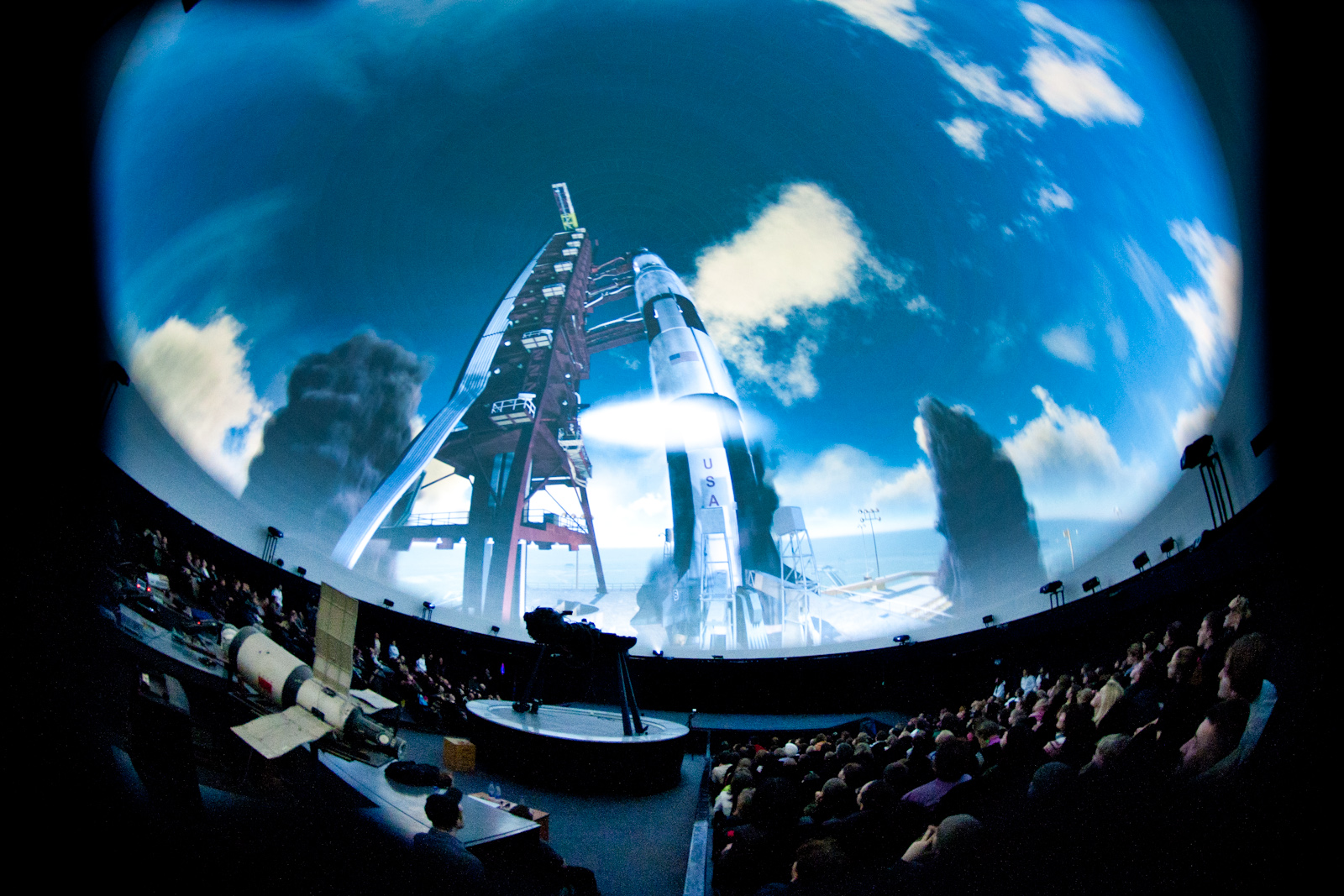