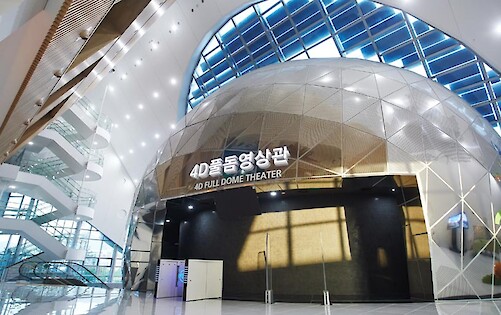 METASPACE, a Korean provider of solutions for astronomy and space science, installed a Screenberry media server at the 4D dome theater of the Gimcheon Science Museum in South Korea.

The ‘Green Future’ Gimcheon Science Museum opened its doors in 2014. Completely enclosed within a park, it communicates green technologies to a young audience in a modern way. Visitors can learn about nature through hands-on exhibits as well as educational shows at a 4D fulldome theater.

“Before the installation of the Screenberry-based projection system, our client had issues with reliability and the stereoscopic 3D playback. Now, everything works smoothly. The projection system is mainly used for screening 3D shows. As Screenberry allows for easy third-party software integration, we also equipped the server with the free astronomy apps Stellarium and World Wide Telescope that the Gimcheon Science Museum can use for real-time astronomical visualizations,” says METASPACE project manager Jeongha, Gwak.

METASPACE is the official distributor of Front Pictures domes and Screenberry media servers for the planetarium market in South Korea.